History of the MUSIC INN 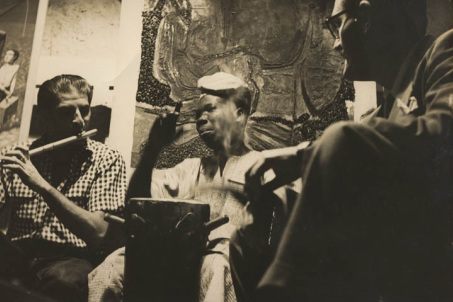 Tony Scott, Olatunji and Marshall Stearns © 1952 The Stephanie Barber Collection.
For nearly thirty years, from 1950 to 1979, just down the road from Tanglewood, was a place dedicated to the presentation and perpetuation of the American, particularly the African-American, musical tradition.  Over the course of three decades Music Inn presented hundreds of concerts, many boasting the greatest names in jazz, folk, blues and rock music. Names like Louis Armstrong, Dizzy Gillespie, Duke Ellington and Count Basie. Pete Seeger, Woody Guthrie, Joan Baez and Odetta. Billie Holiday, Mahalia Jackson, Sarah Vaughan and Ethel Waters. The Rev. Gary Davis, John Lee Hooker, Sonny Terry and Brownie McGhee. The Modern Jazz Quartet, Coleman Hawkins, Miles Davis and Thelonious Monk. Herbie Hancock, Chick Corea, Weather Report and Dave Brubeck. Taj Mahal, Jimmy Cliff, Bob Marley and Muddy Waters. The Kinks, the Byrds, the Eagles and America. Bruce Springsteen, Lou Reed, Bonnie Raitt and Van Morrison. All of these artists, and many, many more, performed at Music Inn in Stockbridge, MA.  From its very inception in 1950, as a place where jazz along with folk and blues could be enjoyed as well as investigated, discussed, dissected, and even on occasion written and recorded, Music Inn was no mere concert venue. Rather, like its neighbor down the road, it was the setting for some of the most remarkable music ever made in the Berkshires, a place where the line separating audience and performer was often blurred, a campus where musicians taught and teachers learned from musicians, and ultimately, a stage where some of the most significant social and cultural transformations of the postwar era were played out in all their triumph and tragedy. When a young, married couple from New York City named Philip and Stephanie Barber bought part of the summer estate of the Countess de Heredia in 1950,they had no intention of living a quiet, peaceful life in the country. Rather, their plan was to re-create in this rural oasis the cultural milieu they had left behind by making their new home a magnet for the sort of company, conversation and conviviality they had come to treasure in the city. 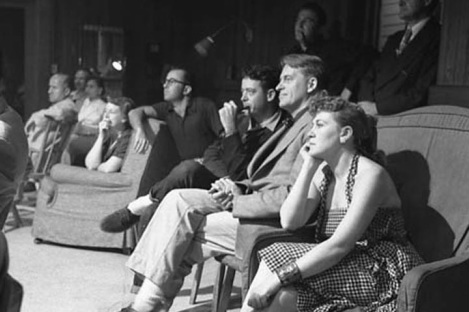 Stephanie and Philip Barber © 1951 Clemens Kalischer
Thus was born Music Inn, with perhaps only a wry nod to Tanglewood up the road. It would be a place where musicians and critics would congregate to exchange theories and riffs, a sort of jazz salon. "When we first opened, it was to explore the beginnings of jazz, where it came from,"' says Stephanie Barber. "Everybody was always arguing about that. Did it come from Africa, did it start in the South, did it come from Africa to the South? So we would invite people from different parts of the world to play with each other and the next morning a panel
of experts would discuss what happened the night before."


- Reprinted from The Life and Times of Music Inn with permission by Seth Rogovoy.