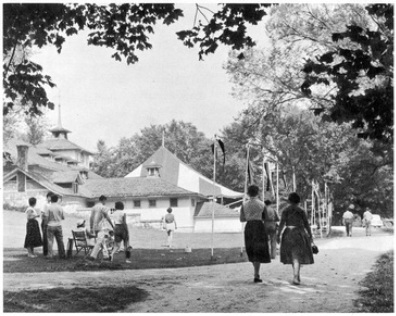 Music Barn 1963 courtesy of Susan Geller
When Don Soviero bought Music Inn from the Barbers in 1960, a new chapter began, characterized as much by Soviero himself as by anything that went on at the place, which he ran from 1961 to 1967. By training a lawyer, Soviero was a flamboyant entrepreneur. He first made his mark in the region in the mid-1950s, when he bought and upgraded Bousquet ski area, modernizing the lodge and facilities, adding a T-bar lift, and introducing snowmaking to the Berkshires, instantly catapulting the sleepy Pittsfield slopes into the front ranks of New England's destination ski resorts.

After an attempt to develop a year-round resort failed -- a project that briefly enlisted the services of Frank Lloyd Wright -- Soviero took over Music Inn. He upgraded the Potting Shed -- which the Barbers opened as a cocktail lounge in 1957 -- into a fancy, Northern Italian restaurant, featuring performers including Josh White, Randy Weston and Leon Bibb.

A duo called the Simon Sisters -- one was named Carly -- played a few gigs there, and a budding folk singer named Don McLean, pre- "American Pie," was also on the musical menu. Soviero maximized concert attendance by expanding out from the barn onto the lawn to allow for audiences of 5-6,000. Many of the same performers from the 1950s continued to play Music Inn throughout the '60s: Armstrong, Brubeck, Seeger, Monk, the MJQ and Ahmad Jamal among them. Some still remember hearing for the very first time at Music Inn a then-unknown young folksinger named Bob Dylan, introduced by Joan Baez at a concert she gave there in the early '60s. But without the students and faculty and the roundtables, says Dave Brubeck, the whole feeling of the place had changed.

During these years Don Soviero was also an active partner in a New York City booking agency that numbered Ray Charles among its top clients. A story is commonly told whereby the singer wanted to buy Music Inn and turn it into a drug and alcohol rehabilitation center for musicians. The deal is said to have been fallen casualty to a personal quarrel between Soviero and Charles, but 30 years later, it seems to have foreshadowed current plans to house musicians in a retirement community nearby on the grounds of the National Music Center in Lenox. Whatever the case, Soviero's behavior eventually sowed the seeds of Music Inn's collapse. As Silvio "Skip" Scarinzi, who was a partner of Soviero's at Music Inn, recalls, "It was always `hey, let's go here, let's go to New York City, let's go to Chicago, get on a plane, get a limo.' I'd say, `come on, what are you doing?' All the time, it turns out, he's going bankrupt." Soviero walked away from the place in the fall of 1967. According to his ex-wife, Louise Hof, he now lives in Hong Kong.
- Reprinted from The Life and Times of Music Inn with permission from Seth Rogovoy 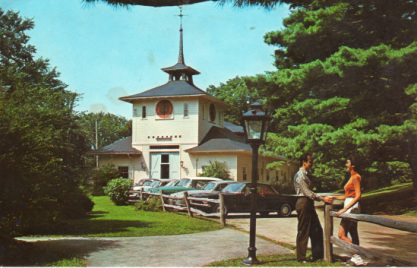 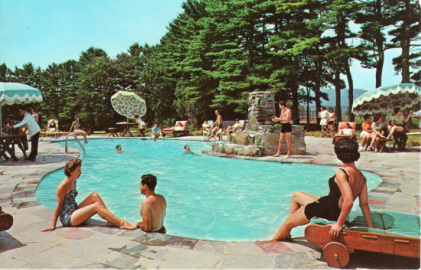