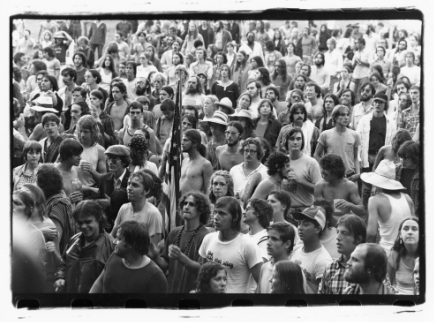 Crowd at Music Inn ©1976 Lee Everett / Fine Line
When Arlo Guthrie played the first concert at the new Music Inn on July 4, 1970 -- echoing his father's opening day appearance almost 20 years to the day -- David Pitt, writing in the Berkshire Eagle, noted that the new stage setup at the bottom of a meadow made "for a considerably more comfortable and relaxed aura....if the vibrations of succeeding concerts are as good and as genuine as at Arlo's, the size of Music Barn's audiences may come to exceed the management's fondest expectations." Pitt's remarks turned out to be remarkably prescient, both in terms of the new cultural zeitgeist and in what lay in store for Music Inn. But in a funny way, this proved to be both a blessing and a curse.

The 70's were as much about the atmosphere and the vibe as it was about the Music Inn... Simply say the words "Music Inn" within earshot of anyone who was there and you'll get an immediate, passionate reaction.  According to David Rothstein, owner of the Music Inn from 1969 until it's closing in 1979, that is because "Music Inn wasn't only about the musicians.  It was the music, the audience, the staff, the crew, the balloons, and the community.  Barriers came down and memories were made."

Depending on your point of view, David Rothstein either saved, revitalized, or reigned over the destruction of Music Inn in the 1970s. Rothstein himself seems to believe the place had a life and destiny of its own, far beyond the power of any individual's control. By the time Rothstein, along with a group of silent investors, took over the property in 1969, it had fallen into disrepair. But something about the place appealed to him. "I liked old buildings," says Rothstein. "I liked these old buildings because they were extraordinary." By training an 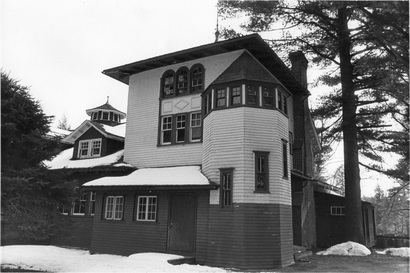 This was fine as long as the peaceful spirit of Woodstock -- which permeated the place, according to those who were there -- prevailed. And indeed, summer after summer, Music Inn was like one, long Woodstock. "There was a hippie, Sixties innocence about the place," says David Pitt, "that provided the opportunity for those who were toddlers during the Sixties to experience in the Seventies what their older brothers and sisters lived through."

It was, in the language of the time, a happening scene. Crowds would gather hours, or even days, before concerts, anticipating the Deadhead- style gatherings of more recent vintage. The place boasted an art gallery, a head shop, a music shop, a movie theater and a couple of bars, one with live bands that kept hotel guests housed in the same building awake deep into the morning. "It was like renting a hotel room at Woodstock," says Vera LeCocq, who lived there and ran the inn for Rothstein for seven years, with entertainment provided by performers typical of the era such as the Byrds, Janis Ian, Tom Rush, America, Poco, John Prine, David Bromberg, Richie Havens, Jerry Jeff Walker, Mary Travers, Joan Baez, Taj Mahal and Ravi Shankar.

"Music Inn was the best place to play in the Berkshires, ever," says drummer Terry Hall, who frequently performed there with his popular band, Shenandoah, which for a while toured as Arlo Guthrie's backup band. "It felt intimate even though it was a big setting. You could have 10,000 people there and you still felt like they were just playing for you. And the sight lines and sound lines were just phenomenal."

Hall is not the only local musician for whom Music Inn was a training ground of sorts. One Stockbridge native who went on to make a successful career in music remembers hearing the likes of the Modern Jazz Quartet, Dave Brubeck and Charles Mingus when he was an aspiring young drummer. Later, as a teen-ager and college student, he remembers Music Inn as "a real hippie hangout," where he attended dozens of shows, worked the ticket booth, played in the bar and even carried Tina Turner's bags to her dressing room. Kenny Aronoff, best-known as the drummer for the John Mellencamp Band, credits growing up around Music Inn for feeding his desire to make it in the music business.

"I can still smell the air and see the fireflies," says Aronoff. "That place had a big impact on me." Aronoff, who went on to record with the likes of Bob Dylan, Willie Nelson, Iggy Pop, Jefferson Airplane, Jon Bon Jovi, Bob Seeger, Elton John, and B.B. King, recalls one concert in particular. "I remember standing up at the top of the hill, right where the road was, after Bonnie Raitt had just played, thinking `what a babe,' wishing someday I could play with her." Some 20 years later, sitting behind his drum kit during a recording session for Raitt, Aronoff's wish came true. 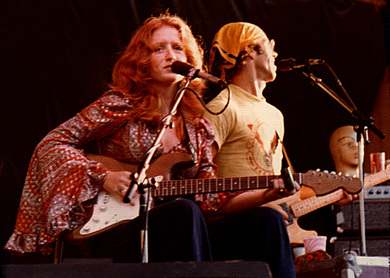 Bonnie Raitt with John Hall 8/18/73 © Lee Everett / Fine Line
But just as the spirit of Woodstock turned sour at Altamont, so did Music Inn experience its own decline, which has unfortunately tended to overshadow memorable concerts by Bob Marley, Van Morrison, Bruce Springsteen, the Kinks and the Mahavishnu Orchestra, shows that stand out in the memories of those who spent every weekend night in the '70s at Music Inn.

"All the legal and political battles I fought were about keeping the society that was turning against the counterculture at bay," says Rothstein, who spent much of the late-'70s at selectmen's meetings and in attorney's offices fending off complaints, injunctions and lawsuits by townspeople angered by the noise and the nuisance brought about by this ongoing Woodstock in their midst.

There were other factors, too, contributing to the ultimate demise of Music Inn. Beer slowly replaced marijuana as the mind-altering substance of choice among concertgoers, and with it came a marked change in behavior -- rowdy replaced mellow. The concert business itself changed. "When we started, the artists just played because their managers told them to," says Rothstein. "There was no talk of minimums and guarantees." Tanglewood became a competitor in the late- '70s when it reinstituted a program of popular concerts, whose impact was especially felt when promoter Don Law used his clout to steer acts away from Music Inn in favor of Tanglewood and other venues he controlled.

By 1979, when disco and hard rock had all but usurped the music and style of the Woodstock era, the hippie audience was gone, too. When a rowdy crowd stormed the gates at an Allman Brothers show near the end of summer, Rothstein took that as a signal to bring down the final curtain. Some still call that the day the music died, but in this case it was more like benevolent euthanasia. 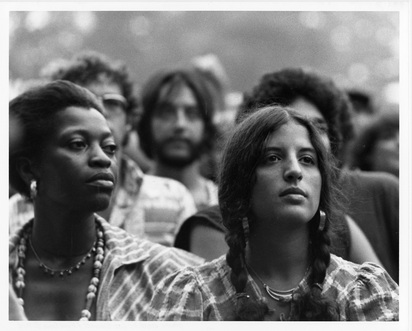 Audience Members © 1976 Lee Everett / Fine Line
As for the place itself, it is now gone, or as they say, it has been "developed," replaced by condominiums whose outlines faintly replicate the French provincial village motif of the original buildings, a legacy passed on by the project's architect, David Rothstein, who now runs an inn in Sheffield where you can hear the best jazz in the Berkshires.

On the grounds of the old Music Inn, however, one original building remains at the top of the hill overlooking the condos, inhabited by one self-described "unlikely" survivor. Nancy Fitzpatrick, scion of the Stockbridge Fitzpatricks who own the Red Lion Inn and Country Curtains, has lived in the Potting Shed since 1973. To this day, she looks out her front windows at the remodeled carriage barn that once housed the MJQ, Dave Brubeck and family, the Barbers, Dave Rothstein, and countless guests, hippies, hangers-on and hangers-out, and remembers.

"I think about the stage, sometimes, and everything that was here, but I've moved on," says Nancy Fitzpatrick, who as a young girl growing up in Stockbridge visited Music Inn during the Soviero era, and later enjoyed a front-row seat during the Rothstein years. "We've all moved on."

Music Inn "was a real wellspring of counterculture," she says, "with everything about that that people love and hate, including the town fathers and all of our parents....Tanglewood was kind of the establishment; Music Inn was the renegade concert venue. Everybody's parents worried about what went on here. They would have probably been disappointed to find out how innocent it all was."

Music Inn, says Arlo Guthrie, was "a great part of the cultural landscape for a long time, and the fact that it's not there any more almost doesn't make a difference. Because now the wonderful thing that has happened is that Tanglewood has recognized the value of that very same music, which is why I'm playing at Tanglewood this summer....I think you shouldn't underestimate what that means."

Nancy Fitzpatrick would like to push that connection one step further. "I wish we could have a Music Inn revival or reunion," she says. "It could be a benefit for the National Music Foundation. We could bring back many of the performers who played there. It could even be held at Tanglewood."

"I think it would be a great tribute to David and Stephanie, because both of them are such unique people. It was only their vision and tenacity -- and their lack of practicality -- that could make something like this happen."

﻿Things didn't always run totally smoothly in the staid 1950s. In fact, given hindsight, a few episodes eerily foretold the shape of things to come in the 1970s, both at Music Inn and in the world at large.

Warren Fowler, who was staff photographer at Music Inn for much of the 1950s, remembers sitting with Billie Holiday during intermission at her performance in 1957. "She drank two tumblers of gin in twenty minutes," says Fowler. "She was so goddamned drunk she could barely speak. But she got out on the stage there and you would never even know she had a drop. It was absolutely amazing."

Compare this with Vera LeCocq's report of Lou Reed's appearance in the mid-'70s. ``He was so out of it," remembers Vera, who managed the inn. "I was down by the stage. He was sitting on a chair, and it was time for him to go on. The band had already started. His guys just grabbed him under each arm, took him up the stairs to the stage -- he could barely walk -- and launched him. But once he was there, he was fully there."﻿ 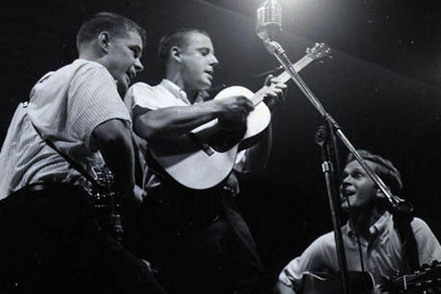 Kingston Trio at Music Barn © 1959 Clemens Kalischer
﻿Many people recall the Kingston Trio's notorious performance in 1959, when a record crowd of nearly 3,000 showed up, including "a discontented mob...a bunch of rowdies shoving ushers and innocent bystanders around," according to a report in the Berkshire Eagle. While tame by contemporary standards, the incident provoked as much commentary and outrage in the local media for weeks to come -- including a lengthy apology from the Barbers -- as the infamous storming of the gates at the Allman Brothers show that would bring down the curtain once and for all on the Music Inn nearly 20 years later to the very day.﻿
- Reprinted from The Life and Times of Music Inn with permission from Seth Rogovoy
1970's Concert Schedule
Click here for Wolfgang's Vault Music Inn Concert Audio
Back to 1950's
Back to 1960's
Top of Page
Music Inn Archives is a non-profit program administered by Projectile Arts, Inc.
* Website created by Lynnette Najimy of Beansprout Productions and Lee Everett of Fine Line Multimedia