Photo from 'Music Inn, a Documentary Film'© Clemens Kalischer
On a chaotic evening in July 1950, Philip and Stephanie Barber opened the doors of the renovated farm buildings they had named Music Inn.  Alan Lomax, Rev. Gary Davis, Woody Guthrie and Pete Seeger were the first performers to play in this idyllic setting to a small audience of about fifty Inn guests. The first night, the country pipes ran out of water and the Barbers had to send their guests to their rooms with bottles of ginger ale to flush the toilets. Despite a series of such trials, these new innkeepers persevered and created a celebrated haven for musicians and music lovers alike...
www.MusicInnFilm.net

Trailer for 'Music Inn, A Documentary Film' by Ben Barenholtz

“A superb film. An invaluable insightinto an era and an essential
part of the history of jazz and American culture.”
- Dave Brubeck

“It is one of the most significant documentaries ever.  Bravo!"
- Jimmy Heath 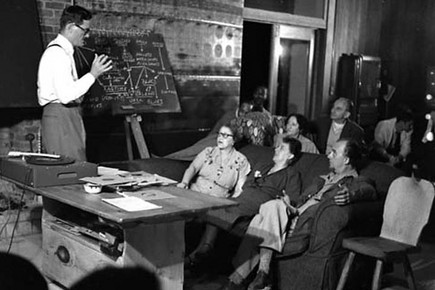